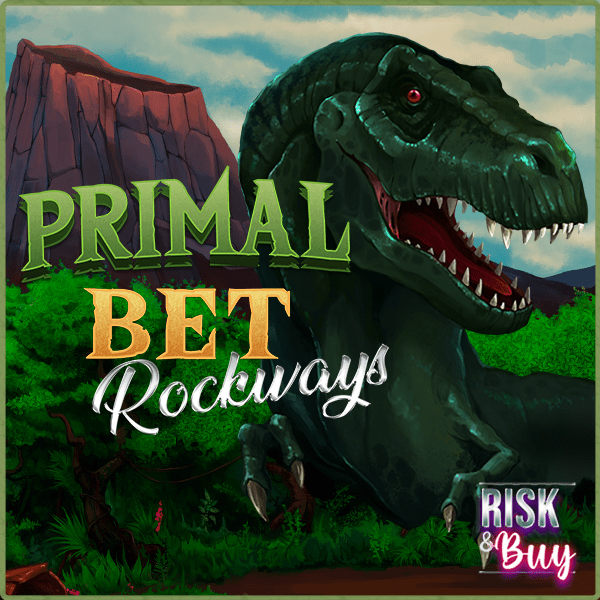 Badass dinosaurs await you with the most exciting game mechanics in the new slot game by Mascot Gaming – PRIMAL BET. ROCKWAYS. Hear the roar!

The Mascot Team never stops surprising and delighting their players and every time comes
up with something new. This time the developer is releasing the impressive PRIMAL BET.
ROCKWAYS slot with an old-school dinosaur-based theme. It is the first Mascot Gaming slot
with Rockways mechanics – that is the main feature of the game. So let’s spill the beans!

The height of each reel of the six reels changes randomly with each spin in the game –
enlarging from two to six symbols in height. There are active and inactive symbols on the
screen. The Active Symbols form combinations and can make from 64 to 46656 pay ways by
changing the height of the reel with each spin, while the inactive ones, called Blockers, do
not participate in combinations. The number of ways playing in a given spin is indicated on
the side of the playing field.

In addition to Rockways, the game also features RockFall mechanics, very much loved by
Mascot players since Bastet and Cats. When a winning combination occurs during a single
spin, the winning symbols explode on the screen, and new Active Symbols drop instead,
forming new combinations. The winning multiplier increases with every new Rockfall: up to
x5 in the regular game and up to x10 in the Free Spin series.

Moreover, during Free Spins, the Wild symbol breaks all Blocker Symbols on the screen,
growing to the size of a whole reel of 6 symbols and forming a Wild Reel, which immediately
provides multiple increases in the number of winning combinations.

As per tradition, the game has a favorite Risk & Buy feature. It allows the players to either
buy a series of 10 Free Spins or risk their winnings for the series of 10 expensive Free
Spins.

Margarita Malysheva, the Head of Marketing at Mascot Gaming: “We are excited to
introduce our first Rockways slot game! The Mascot team would not be themselves without
adding a few more fun features to the game – RockFall mechanics, Risk & Buy, and Wild
Reels feature. Prehistoric beasts, beloved by all of us as children, with an old-school vibe,
are the theme of the new, undoubtedly excellent slot by Mascot Gaming. Hear the roar of
dinosaurs!”